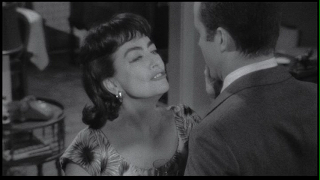 So…let’s just say it: this is a 1960s horror dream team. First, we’ve got Castle, one of the great pioneers of sleaze; his best movies are always clumsy rehashes of more popular films of the time (and, for my money, his movies always came out better). Then…you’ve got Bloch, who wrote the book Psycho, which Alfred Hitchcock took and made into a BIG IMPORTANT movie. Yes, that’s all fine and good…but the book had an inherent sleaziness and cheapness that really only someone like William Castle could capture on film (and did, in Homicidal, a total Psycho rehash).

And then there’s Joan. Look, I am totally biased here, because I’m a huge Joan fan. And how can you not be? Here is a woman so obsessed with being a star that it consumed her entire life. Her career was basically a series of comebacks; she started out as a 1920s flapper (Our Dancing Daughters)…made a comeback as a 1930s shopgirl (The Women)…made a comeback as a 1940s tough-as-nails career woman (Mildred Pierce)…made a comeback as a 1950s melodrama victim (Sudden Fear)…and finally made a comeback as a 1960s/70s scream queen in cheap horror (Whatever Happened to Baby Jane?, I Saw What You Did, Trog, etc.). If you ask me, this is the perfect career trajectory – she saved the best for last. And for me, she was never better than in Straight-Jacket, which kind of smooshes all of her career high-points into one big cornucopia of camp.

You see…William Castle’s films generally have some kind of gimmick, whether it be the “Fright Break” of Homicidal, the Tingler’s vibrating seats, or skeletons swinging on wires during showings of House on Haunted Hill. Here, the gimmick is Joan herself; she is so completely over-the-top that the performance is basically a template for drag queens for years to come. By 1964, Joan Crawford was pushing 60. But damn if she’s going to let you know that – she opens the movie playing a 20-something, and then we flash forward 20 years to the future. If you’re any good at math, that means her character Lucy Harbin is supposed to be 40-something. People, there is absolutely nothing that looks 40-ish about Joan Crawford in this movie; her cakey makeup, grizzled neck (generally hidden by a shadow bar), and bad wigs are a dead giveaway to her real age. But that’s the beauty of Joan’s post-peak career; she was apparently always lopping off years from her characters, and it only makes them much more enjoyable. Had Joan been alive in the 2000s, there’s a good chance she’d be doing absurd nude scenes like Sharon Stone in Basic Instinct 2: Risk Addiction (where Sharon’s ridiculous rack bobs in a hot tub like coast guard buoys).

Anyway, Straight-Jacket tells the story of Lucy Harbin, who a voiceover tells us is “a woman…and very much aware of the fact.” Our first shot of Lucy is a toe to head pan that reveals Joan trying her best to look like a luscious sexpot, but coming off more akin to an overcooked turkey. She’s got on her best pair of 40’s ankle-strap pumps, big gold hoop earrings and gaudy bangle bracelets, and smokes a cigarette like it’s her last meal. This is Joan Crawford characterization #1…the sexual woman who knows exactly what she wants (see: Mildred Pierce). Anyway, Lucy comes home to find her husband in bed with another woman and, going temporarily insane, she grabs and axe and chops their heads off. This is done in a wonderful shadow shot that reveals the heads popping off cleaner than a Barbie doll’s. Joan, meanwhile, swings the axe like a pro, then starts screaming, “LEAVE ME ALONE! I’M NOT GUILTY!” and gets carted off to the loony bin. Oh…and her young daughter Carol witnesses the whole thing. Uh oh…

Twenty years later, Lucy is released. Yes, my friends…for decapitating two people, she is punished with twenty years in a mental hospital. Come on…there are first-time drug users who do harder time than that. Hell, even Martha Stewart had to do jail time, and she didn’t even kill anyone. Anyway, Lucy comes home to stay with her brother and his wife, who’ve been raising Carol all along. This section presents us with Joan Crawford characterization #2, in which Lucy is weak and timid and walks around in a frumpy dress with her hands pressed to her mouth (see: Sudden Fear). Carol, meanwhile, is pretty and well-adjusted, and is played by Diane Baker, who is one of my favorite “good girls” of the 1960s. She was in Hitchcock’s Marnie, but you might also recognize her as the senator whose daughter is kidnapped in Silence of the Lambs. Mother and daughter have an awkward reunion, but are soon walking around the family farm like…well…family, watching various animals get butchered. Personally, if my mom had chopped off my dad’s head in front of me, I would probably keep her away from all cutlery.

Anyway, after basically inviting her mother to pick up an axe and slaughter whatever she pleases, Carol takes Lucy into town for a makeover. Here is where we get Joan Crawford characterization #3, which is by far the best of the movie. Dolled up in the same sexy pumps and dress as she wore in the beginning – and with an even goofier looking black wig – Lucy decides to reclaim the many years she missed while holed up in the booby hatch. This apparently means becoming a complete tramp; think of Joan’s character in The Women, Crystal Allen, after 25 years of tough living. Lucy instantly takes to puffing on cigarettes, swilling straight liquor, and hitting on her daughter’s boyfriend. This failed seduction scene is hilariously uncomfortable, as Joan strikes a match on a spinning record (something I’m still trying to master) and rubs her fingers all over the guy’s lips, telling him “I’m just a country girl” and completely ignoring her horrified daughter. Why Lucy is acting this way is never explained; the behavior comes out of nowhere and is never mentioned again in the movie. However, you kinda get the feeling that this is the truest scene in the movie…like there were a lot of nights when Joan Crawford got drunk and tried seducing younger men with babytalk and cigarettes.

So…as Joan Crawford and company are busy trying to figure out exactly what kind of character Lucy Harbin is supposed to be, people are getting their heads cut off. This includes the young, lumbering George Kennedy as a creepy farmhand. Actually, the scene where George gets it is done pretty well; he’s searching around in a dark meat locker when the killer sneaks up behind him and beheads him in a single swipe, and then we suddenly cut to some squealing pigs in a pen. So maybe William Castle was capable of delivering some effective scares. Then again, in a few moments, Joan is going to literally unmask the killer in straight-out "Scooby Doo" fashion. So, maybe not.

Anyway, after a botched dinner party in which Joan freaks out in front of her daughter’s boyfriend’s parents, someone starts stalking around the house with a hatchet. Finally, we see who it is…Lucy! Except that suddenly Lucy bursts through the door...there are two Lucys! Actually…it turns out little Carol has been donning a Joan Crawford Halloween mask and offing everyone in sight; apparently, seeing Mommy butcher Daddy really messed Carol up. This sets up a great finale in which Diane Baker punches her mask and screams, “I LOVE YOU, I HATE YOU” repeatedly while Joan milks the scene for all it’s worth by grabbing onto a pole and sobbing hysterically. According the to DVD featurette, Joan’s moment was improvised on the set when she became concerned that Diane Baker’s big scene would overshadow the veteran. That’s our Joan!

It’s tempting to enjoy Straight-Jacket for all the external reasons; there’s a compelling perversity in watching the movie and knowing that Joan Crawford’s real daughter wrote a book accusing her mother of being a monster that tried to ruin her life. It’s also enjoyable to know that William Castle was over the moon working with names like Robert Bloch and Joan Crawford, thinking that he was finally creating that elusive A-picture. But I love Straight-Jacket for just being what it is: a cooky 1960s shocker that makes absolutely no sense and is full of great moments. That alone would guarantee at least a few fingers. But having Joan Crawford, wig askew and gams on full display, in the center of it all easily elevates this one to FIVE FINGER-ed classic status.
Posted by Tower Farm at 12:04 PM