Purging after the Weekend Binge (Halloween 2, The Final Destination, and Sorority Row) and Screamfest 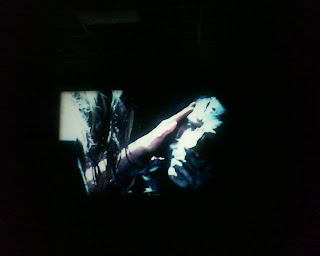 Anyway, this weekend, the two of us were able to squeeze in three movies, total. JM saw The Final Destination in 3d, Billy watched Sorority Row, and the two of us took in Halloween 2. Here are some quick thoughts on the three movies.

This movie is a totally boring. Far and away the worst entry in the series. The special effects were terrible and the actors had all the flair of Star Trek: The Next Generation's "Data". Now, don't get me wrong, I love cheesy effects and bad acting. But, the effects were just lame and the acting was nonexistent. Yawn.

Everything about this movie is perfect. It is kind of like the Black Xmas remake, except instead of a yellow-skinned Billy and a man playing Agnes, we get someone who used to be Carrie Fisher and a person that appears to be Bruce Willis in drag. Basically "borrowing" the plot of I Know What You Did Last Summer and "borrowing" the characters from Valentine, the cast and crew come up with a real winner. Mixing in some nasty bloody death scenes, nudity, and the revelatory performance of Audrina Patridge, this is a movie made for Tower Farm.

By JM and Billy

We predicted we would be hailing this as a "disasterpiece", and it is. It also happens to be the best slasher movie ever made. Period. From Rob Zombie's insistance on making his wife the star (even though she died in the first installment), to his reimagining of Haddonfield as some sort of barren Swedish countryside, our director excels at screwing up every single element. But, like Pieces before it, every nonsensical moment is played to perfection. Highlights include: Malcolm McDowell's press conference meltdown (and achievement in overacting), a costume party that seems to take place on another planet, another thankless performance for Danielle Harris who has to wear fake scars throughout her screen time, and the absolute brilliance of Scout Taylor-Compton playing a Goth 12-year old. Needless to say, we can barely wait until this is on DVD.

On a final note, Billy and I have secured our tickets to Screamfest in Orlando, FL this year (www.spookyempire.com). With guests including Linda Blair, Danielle Harris, Fairuza Balk, and Shannen Doherty, the weekend is sure to be orgasmic for us. Just curious to know if anyone else is planning on attending. Let us know if you will be there!
Posted by Tower Farm at 2:04 PM