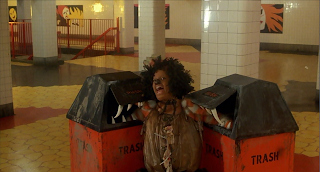 Reviewed By: Billy
Just in case anyone’s wondering why a review of The Wiz is showing up here at Tower Farm, look no further than 13 minutes into this movie, when this happens: 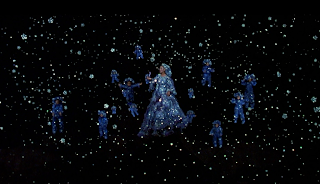 Yes, people, that is Lena Horne floating in space, surrounded by a bunch of little people in glittery blue suits. If ever there was a terrifying image deserving a place at The Farm, this is it.
Anyway, The Wiz is a remake of The Wizard of Oz – and to be more exact, an adaptation of the Broadway musical The Wiz, which took the familiar characters of Dorothy, the Scarecrow, etc. and used an all African-American cast and a more modern, soulful score to tell the story of Oz. The original 1939 movie is, of course, one of the most popular ever made, and the Broadway show was a smash hit, scoring several Tony Awards and launching many a career. This movie – featuring an all-star cast and an enormous budget – crashed and burned harder than Dorothy’s house came down on top of the Wicked Witch.
Given that the formula for Tower Farm success goes something like this: classic + remake + giant budget – good ideas = BRILLIANCE (see: Rob Zombie’s Halloween, Black X-mas)…I stand by my decision to review this movie.
The Wiz opens with what many critics at the time probably felt was a startlingly appropriate image: 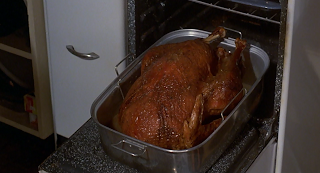 It’s the holidays, you see, and Dorothy is about to be swept away to the world of Oz. We all know young Judy Garland originated this role, and on Broadway teenager Stephanie Mills wowed the crowds. Here, we get the one and only Diana Ross…trying mightily to slip her 34-year-old feet into a pre-teen pair of shoes. Now, other than this little crack about her age, I refuse to utter a bad word about Miss Ross. As longtime readers know, I am a Diana Ross fan. Actually, I’m a fan in the way Michael Biehn was a fan in The Fan (where he was obsessed with Lauren Bacall, playing a diva named Miss Ross…coincidence?). In other words, yes, sometimes I sit at home pretending to have dinner with her and often find myself snipping out little pictures of her from magazines and inserting them into my own photo albums. I live and breathe Diana Ross, and will not apologize for it. And just in case you don’t believe me, my brother JM will be happy to tell you about the time I dragged him to one of her concerts and then spent the entire evening crying. Seriously. Here’s the tour program: 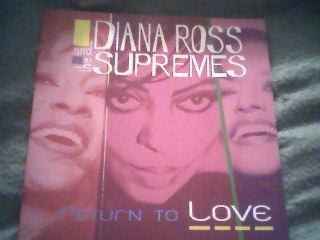 Admittedly, Diana’s cropped afro look isn’t her most flattering, but the real scares begin when she gets blown to Oz by a kind of blizzard-tornado hybrid (Now there's a Syfy movie title if I've ever heard one), and is immediately greeted by frightening paper-doll figures emerging from the walls and maniacally repeating “To-to” in unison. I can only imagine kids in 1978, seeing this in theatres, running down the aisles screaming at this horrifying sequence. Oz, you see, is a graffiti-covered urban wasteland resembling Tony Todd’s lair in Candyman 3: Day Of The Dead. No, no…there are no rainbows and poppies here. Instead, Dorothy seems have to fallen straight onto the set of Dressed To Kill as envisioned by Jim Henson.
The film actually becomes a journey from one terrifying set-piece to the next; whether surrounded by giant cigar-smoking crows or trapped in a subway being menaced by sinister garbage cans, Dorothy seems to be descending into the very pit of Hell. There is no way anyone in their right mind could have thought this movie would qualify as a family-friendly musical…unless that person was thinking about my family.
Speaking of my family…did I mention that there’s a prolonged sequence featuring cigarette-smoke hissing prostitutes? 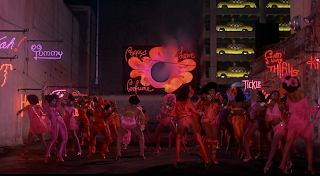 Along the way, of course, Dorothy picks up her collection of friends, including the Scarecrow. Now, the DVD box says something about Michael Jackson playing the Scarecrow…however, I’ve seen The Wiz multiple times and have yet to spot the Michael Jackson I know in it. I am, however, glad to see that Al Roker was doing such fine work early in his career. 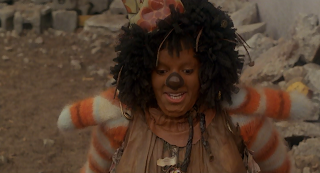 As if the hookers aren’t bad enough, The Wiz next literally lays out the groundwork for the Saw movies, torture contraption by torture contraption. Dorothy and the gang are chased through a parking garage and end up in an underground sweatshop, in which the Scarecrow is buzz-sawed in half, the Tin Man is melted alive, and the Lion is strung up by his tail. The culprit, meanwhile, is this hideous creature, surely the most chilling horror villain this side of the invisible chicken demon of Paranormal Activity: 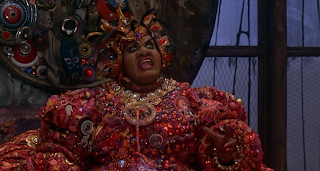 Anyway, more than two hours after it all began, we find out that “home” was inside Dorothy all along, and mercifully she’s transported out of the fiery depths of Hell back to New York City…which, depending on who you ask, might not be such an upgrade. But thank God she’s far, far away from those paper-doll people and the carnivorous garbage cans.
Anyway, other than being way too long (I was able to cook an entire meal, eat it, and wash my dishes during ONE of the musical sequences), this movie is pretty awesome. It scared the hell out of me as a kid, and still does as an adult. Being that I love Diana Ross and bombastic movies, this combination is a winner. The only major disappointment, again, is that JM and I can’t find Michael Jackson anywhere in this movie.
FOUR FINGERS!
Posted by Tower Farm at 6:39 AM