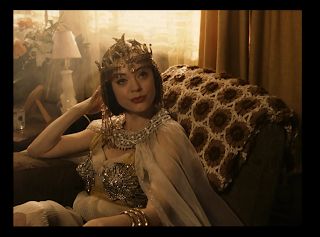 2006's big-screen disasterpiece The Black Dahlia is my favorite Dario Argento movie ever.

Oh, sure, I know the movie is credited to Brian De Palma.  But who are they kidding?  We've got a convoluted and completely implausible plot strung together by unnecessary camera tricks, performances that range from brain-dead to mind-blowingly histrionic, Eurotrashy dialogue (including: "I think you'd rather f*ck me than kill me...but you don't have the guts to do either!"), and an ending so abrupt that one wonders if a studio exec finally just decided to pull the funding and call it quits.  Oh...and did I mention the crazy old hag character with too much eyeliner that's introduced early in the movie and then turns out to be important in the end?  Hello...am I talking about The Black Dahlia or Deep Red?

Anyway, this movie is based on the book by James Ellroy, which in turn is based on the actual Black Dahlia murder case from 1940s Los Angeles.  The facts of the unsolved crime are extremely creepy and it's the kind of story screaming out for a great, chilling movie adaptation.

Someday I hope that happens.

For now, we'll make do with this faux-Italian comedy of errors, which stars the blandest pair of leading men this side of the Miami Vice movie and two female leads who are so miscast that it's almost painful to watch them.  And by painful, I mean my stomach was in knots from the constant fits of laughter.

The men are Josh Hartnett and Aaron Eckhart, playing police partners who become obsessed with the murder of a young actress nicknamed the Black Dahlia.  Eckart in particular goes off the deep end, acting less like a haunted investigator than like a really mean drunk who's just been refused another shot by the bartender.  Why exactly Aaron becomes such an a-hole and so devoted to the dead girl is never explained nor explored, leaving us with a really pissy rageaholic who just seems like a big baby. 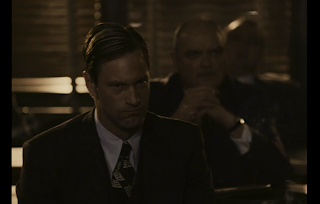 Hartnett, on the other hand, is just adorable in his role as a jaded, embittered cop.  Looking like a 12-year-old on "bring your son to work day," Josh tries hard to adopt the tough-guy indifference of a Bogart or a Ladd.  He doesn't do a bad job...unfortunately, in the period costumes and contantly smoking, he just comes across like a bored and confused kid...like his dad brought him along to work and then left him in the waiting room all day (kind of like our dad, Ralph, did to JM and me...which explains why we are basically bored and confused adults). 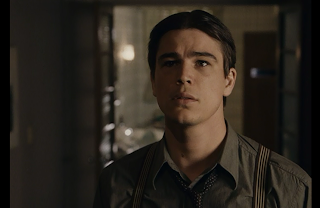 But where The Black Dahlia really scores is with its actresses.  Scarlett Johannsson is the top-billed lady here, although her role amounts to a couple of scenes as the woman who comes between the two cops.  I'm actually not really sure why this character was included at all, as she doesn't really do anything of importance regarding the story.  My guess is that someone decided since Scarlett Johannsson is always trying really hard to look like she's a 1940s actress, they should just go ahead and put her in the film.

Rose McGowan makes a welcome appearance here, in a one-scene role where she speaks as if she's rehearsing a scene from "Charmed" (i.e. not even attempting to sound period-appropriate).  Fiona Shaw plays the crazy old lady in a performance that is so over-the-top that she may as well be on Mars.  I imagine everyone was just too afraid of this woman to tell her to bring it down a few notches, resulting in a performance that is so crazily Italian you'll be amazed that a) it's not dubbed, and b) it's not Piper Laurie. 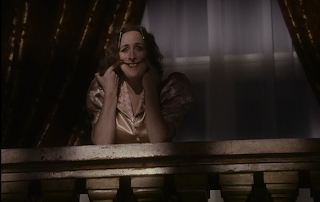 But true top honors here go to Hilary Swank, she of the two Oscars, who turns in a performance that will absolutely win her a Farmy Award as Best Actress Impersonating Katherine Hepburn And James Corburn At The Same Time.  (I have no idea what that means, but it's making me laugh right now, so I'm leaving it).  Basically, she looks totally weird, speaks totally weird, and kicks this little film up to a new level of stupid.  Here's the thing...Hilary Swank may be a great actress, but she's been cast in the sexpot role here.  She's the all-out femme fatale who's supposed to entangle men in her web of sex and mystery.  And...well...she's not a sexpot.  Here, she's more like a gawky teen boy who's just rented the "sexy Elvira" costume for Halloween: 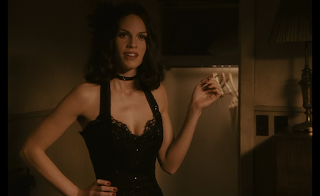 Look, I have no idea how nobody put a stop to this mess before it was released.  Surely at some point somebody looked around, shook their head, and muttered: "This can't end well."  Thankfully, that person kept his or her mouth shut, The Black Dahlia hit theatres, and now we can enjoy insanity again and again.  Rarely has an American film channeled Eurotrash so effortlessly (well...except for this all-time American Eurotrash classic), and that alone merits it...

THREE-AND-A-HALF FINGERS!
Posted by Tower Farm at 4:20 AM