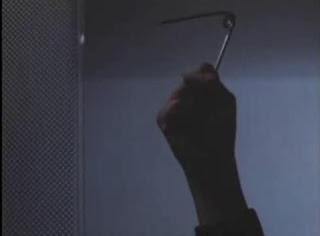 Oh, God...this is the worst Jane Fonda movie ever.

Jane Fonda, of course, isn't actually in this movie...but I blame her completely for Killer Workout. If the Jane Fonda workout tapes in the 80s hadn’t sparked off an insane craze where women wore legwarmers and headbands and jumped around on little blue rubber mats, the writer/director of this complete trainwreck might never have been inspired to make it in the first place.

Otherwise known as Aerobicide, this film brings together the most nausea-inducing elements of the 80s: enormous frizzed hair, neon leotards, synth music, and gratuitous butt shots. Set at Rhonda’s Workout (which appears to be located in a rundown California strip mall and features a front sign made of backlit cardboard), the plot involves…well…take a guess. People are dying at a gym. The opening sequence involves a woman burned alive in a tanning bed accident (the bed literally explodes…and you thought skin cancer was bad), and is so amazingly inept that I hesitate even trying to describe it. Let's just say that one time, in 10th grade, I used a camcorder to shoot a school project about forensic science...and it had infinitely more finesse than this.

The acting here is strictly late-night Cinemax stuff; the actors themselves are as bizarre as you’d expect from a movie where the best looking thing on screen is a pair of hot pink fingerless gloves. None of the women look like they’ve ever set foot in a gym, and the overpumped men are mind-numbingly bland; one of my favorite scenes includes two tough guys who engage in possibly the most half-assed fight scene in history – we can literally see their hands stopping before they touch each other’s bodies. Whoever choreographed that one likely has a very successful career directing plays at a small-town civic theatre.

Speaking of choreography, a good 70-percent of this movie is spent in aerobics class, with agonizing montages of perky women doing leg lifts and pelvic thrusts. If bouncing ass-cheeks is your thing, then this movie is the greatest porn ever made. The music varies from generic Casio synth to raspy-voiced women singing intricate lyrics including “You gotta workout, you gotta workout, animal workout.” And here’s the really brave thing: the music NEVER STOPS PLAYING. Seriously, there are only two or so short scenes in which music is not blaring in the background. It’s there at the most inappropriate places, often drowning out the dialogue (which…upon writing this…I realize actually isn’t a bad thing). And yes, by the end, we do get a workout song called “Aerobicide”…which I am desperately seeking on vinyl as we speak.

Anyway, let’s just get this over with, shall we? Gym owner Rhonda...who, might I add, has had a really bad attitude throughout the movie, turns out to be the woman who got burned in the tanning accident in the beginning, and she’s been killing off “beautiful” people out of jealousy (where, may I ask, were these so-called beautiful people?). But, turns out, there’s another killer – it’s one of the meatheads from the gym who is obsessed with Rhonda. So, Rhonda is the one with the big safety pin, and the jock is the one who used a machete in a few other scenes. She’s killing because she’s a burned, bitter a-hole, he’s killing because he doesn’t want her to get caught, and all this sets up a WONDERFUL ending sequence where Rhonda, bare breasts covered in latex “burns,” throws on a bad wig and shoots the jock in a locker room, letting him take the fall for the killings.

So…what’s left to say about a film that ends with yet another aerobics montage, featuring people who ALREADY DIED IN THE MOVIE? Only this: It's all your fault, Jane.

ONE AND A HALF FINGERS
Posted by Tower Farm at 11:29 AM