The Texas Chainsaw Massacre: The Beginning (2006) 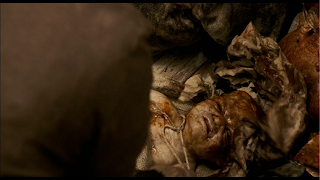 The Texas Chainsaw Massacre: The Beginning is brainless in a way few movies are brave enough to be. It opens with a prologue set in 1939 in which an obese woman in a meat-packing plant pees blood and ends up popping out a deformed baby.

I’ll give that a minute to sink in.

This movie marketed itself as attempting to give us the disturbing details of Leatherface’s life in order to explain why he came out the way he did. You know, kind like Rob Zombie’s Halloween and the Black Christmas remake did for its killers…and we all know how well those turned out. For some reason, filmmakers are convinced that backstory is the way to make a horror film creepy. Why? Who are these filmmakers? Were they born in Italy? Why do they think showing Michael Myers as young, chubby trailer-trash or Billy a yellow-skinned mama’s boy will make either man scarier? 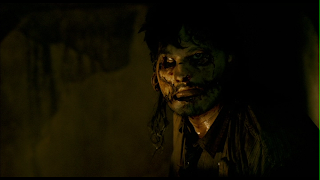 After our 1939 prologue in which, let me repeat, a woman sort of pees out Leatherface and then dies, we flash-forward to 1969. I love these 1969 scenes because, well, there’s very little effort made to make them actually appear that they’re not taking place in 2006. Oh, sure, the kids talk about Vietnam a lot and Jordana Brewster wears a do-rag, but that’s about it. We do get the rocking song “All Right Now” by Free blasting on the soundtrack, which is a nice, sloppy touch since it wouldn't be a hit until 1970.

Anyway, the only reason these kids are supposed to be from the 1960s is so that the filmmakers can call this The Beginning. However, what happens to these kids is exactly the same thing that happens to the idiot young people in every other Texas Chainsaw movie. In fact, other than that prologue with the pee-baby, this is exactly like every other movie in the series, right down to the dinner table scene. 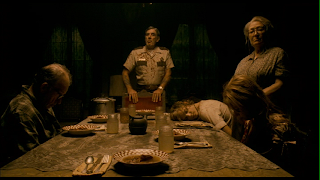 And suddenly, for the first time ever, I’m asking: where are the “disturbing” details of Leatherface’s life? Where’s the outcast little boy who gets his first taste of meat and decides to start cutting up people? I mean, I’m not a fan of backstory…but when you’re gonna market a whole movie around it, I at least want something to make fun of!

What we do get are four whiney teens being terrorized for about 90 minutes, and you’ll be on the edge of your seat the whole time…waiting for them to finally bite it. Jordana Brewster plays the Marylin Burns-ish role from the original (i.e. she runs around in the woods and gets tied up at the dinner table and jumps through a window), and the other kids play the other kids from the original (i.e. they all get meathook-ed and chainsaw-ed by Leatherface). Along the way the kids have a run-in with some supposedly tough bikers (led by Lee Tergesen of “Oz”) who in one great scene actually terrorize the kids while they’re all speeding down the roadway. Now, I don’t know about you, but if I were in a jeep and some a-hole on a bike next to me pulled out a gun, I’m pretty sure I could take him: just swerve! 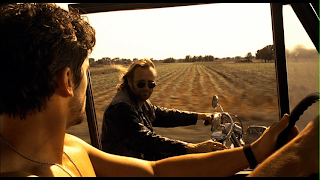 Anyway, you already know exactly what’s going to happen here; Leatherface and his family of moronic rednecks will cut up and eat the teenagers until there’s only one left. That, of course, is Jordana, and she’ll finally escape. Except…being that this is The Beginning, you also know that Jordana will have to die…because if she got away and reported the family, then there’d be no parts 1, 2, 3, and so on. So what we end up with is a completely tensionless movie which instead tries to keep our attention with lots of blood and lingering shots of gore. These are supposed to make us recoil in our seats and say to ourselves, “I can’t believe they showed that on camera!”…just like every other horror movie that's come out since someone gave Eli Roth a digital camera. What these movies just don’t understand is that no matter how much money is spent on makeup effects, and no matter how many shadows you throw all over everything, that “throat” getting slit is still going to look like a big pouch of latex filled with chocolate-covered gummi worms. 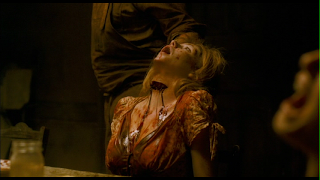 So…just to reiterate, the back of the DVD box says, “…witness how Thomas Hewitt became the infamous and deranged serial killer Leatherface.”

Umm…that’s not quite what happens. If I could, I’d change it to sound more like, “…witness how Leatherface cuts apart annoying young people just like he will in every other movie.” Yeah, that’s better. And enough to get it…

THREE FINGERS (TWO for the movie, ONE for John Larroquette’s hammy little voice cameo at the end) 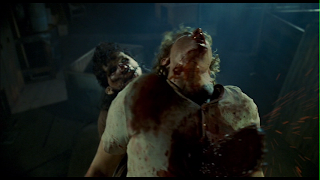