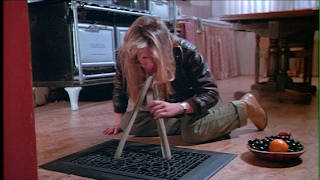 Having been a college journalism major myself, let me just say that The Unseen should be required viewing for anyone planning to be a reporter. Surely what Barbara Bach has to go through in this movie – all because of a story about some kind of Danish Festival – would weed out those kids who really aren’t cut out for the world of TV news. Lessons learned, which should immediately be inserted to any Journalism 101 class, include:

1. Be weary of any assignment that takes you to Solvang, California. Aside from being the setting in this unbelievably weird movie, it’s also the setting for the unbelievably weird Homicidal.
2. If your station is too cheap to properly book you a hotel room, don’t go on-assignment.
3. If you do go on-assignment without a hotel reservation, never accept the invitation of a jittery Ernest Borgnine look-a-like to stay at his house.
4. If you do end up staying at a secluded mansion with an Ernest Borgnine look-a-like, never leave your hot, blonde, and frequently topless friend alone in her room, as there’s a good chance she’ll be attacked by the homeowner’s deformed son who lives in the basement.

Personally, had these lessons been available to me as a budding journalist, I would have switched majors and done something a little safer. Maybe art history. Of course, thus far in my life I have yet to make friends with a hot and frequently topless blonde, so I’m probably OK.

Anyway, The Unseen is the kind of movie you might get if you took the mind-numbingly dull Unhinged and spiced it up with a little dash of Ordinary People. On the surface, it’s a horror movie about three young women terrorized when they choose the wrong house to stay in. But at heart, this movie is one of those late 70s/early 80s family dramas, where the mother and father have an uncomfortable passive-aggressive relationship that ends up totally screwing up their kids. Of course, The Unseen is based on a story in part by Stan Winston, so the mother and father happen to be siblings, and their kid is a deformed incest-boy locked in the basement. But still, all the depressing familial concerns are there, right down the final climactic struggle between father and son.

Had I known I was in for a sort of twisted take on Kramer vs. Kramer, I probably would’ve never even started watching. But The Unseen lured me in with one of my favorite horror characters of the 80s: the TV newswoman. Like Morgan Fairchild (The Seduction) and Lauren Tewes (Eyes of a Stranger), Barbara Bach is a stunningly attractive woman who appears to have never been in front of a news camera before. Nonetheless, we’re asked to believe that Bach’s character is an Emmy-winning big-city reporter. Why exactly a hard-hitting Emmy-winning reporter would be sent to do a story on this town’s Danish festival is also never addressed…but I’m guessing someone at that TV station is out to get her. 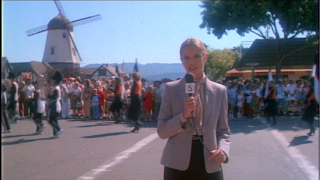 Anyway, after an uncomfortable scene between Bach and her ex-football player boyfriend (played by Deadly Blessing’s Doug Barr), she’s off to Solvang along with her sister – who happens to be her photographer – and her pretty blonde friend who’s…ummm…well, it’s never really explained who the other girl is. She just kind of sits in the backseat of the car making faces and blowing bubble-gum bubbles right into the camera: 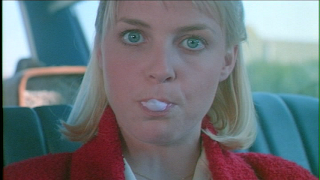 I’m gonna go ahead and guess she’ll be the first to die.

After finding out that they don’t have a hotel reservation, the girls end up encountering museum owner Ernest Keller (a crazy performance by Sydney Lassick), the aforementioned Borgnine-esque guy who does lots of giggling and stuttering and ends up inviting the girls to stay at his house. The girls seem only too happy to follow the old guy to his secluded mansion somewhere in the deserts of California. And as if this wasn’t a stupid enough move, the girls don’t even seem concerned when Ernest’s wife Virginia walks in and starts crying while uttering the line, “I hope you’ll be comfortable.” Umm…when the mistress has an emotional breakdown while welcoming you to her home, it’s probably a clue that you should get out as fast as possible. But…our plucky newsgal and her friends decide instead to mock the poor woman and head right up to their rooms.

You’ve got what’s coming to you, girls!

Soon after, Barbara and her sis head off to the festival, leaving behind the random bubble-gum blonde to take off her clothes and take a nice long bath. Meanwhile, Ernest pulls a Norman Bates and watches the girl the whole time through a keyhole, which miraculously seems to give him (and us) a panoramic view of the entire room. Seriously; first we’re watching the girl standing up and stripping down, and we’ve got a perfect view of her soaking in the tub. This keyhole must be the size of a fist! Can I please install these in my guest rooms? 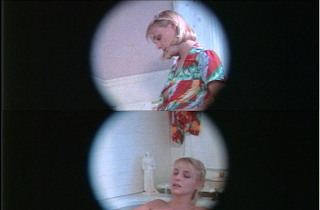 Before long, Ernest is revealing his true crazy colors by beating on his wife and clipping clothespins all over his face… 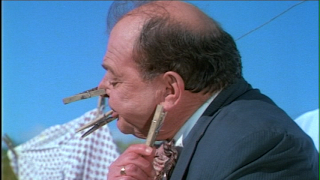 …meanwhile, something from the basement crawls up through vent and kills the blonde. This is actually a pretty cool scene, sufficiently violent and intercut with some nasty footage of a chicken getting beheaded. I could have done without the shot of the headless chicken spasming on the ground…but that’s just me.

Anyway, lots of other things happen and eventually Barbara ends up locked in the basement with the incest-spawn, which turns out to just want to roll around on the ground and play with her. Seriously, the boy does absolutely nothing to actually threaten Barbara, except for putting her hair in this mouth, which makes her Felissa Rose-ish reactions like this seem a little extreme: 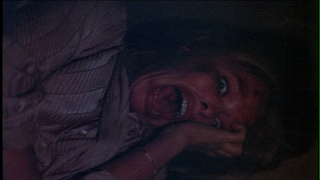 Soon, Mom and Dad end up in the basement, too, and the whole family starts an epic argument that will end in gunshots, bloodshed, and nails through heads. This is where The Unseen tragically takes the turn from bizarre horror to domestic drama. Instead of being scary, the boy in the basement is just kind of depressing. Unlike Stan Winston’s later foray into family inbreeding territory (Wrong Turn), this movie actually attempts to portray the tragic effects of incest, which makes it perfect for Lifetime Television…but not for 80s horror. I mean, come on…I don’t want to leave an 80s horror movie feeling sad. I want nudity and blood! Give me inbreeding cannibals chomping on someone’s liver…not a sad boy who just wants a playmate. 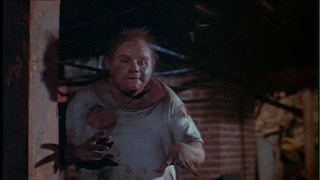 Director “Peter Foleg” is apparently actually Danny Steinmann, who also directed Savage Streets and Friday the 13th Part V. Well...I’m gonna have to say Savage Streets is the real feather in Danny’s cap. Still, The Unseen is worth at least one viewing, if only for the terrifically insane scene in which Ernest Keller has a drunken conversation with his father’s dead, stuffed body. This guy should’ve won some kind of award for this movie. Otherwise, just make sure to have a box of tissues next to your box of popcorn…